The new Galle Fish Market reconstructed with the assistance of UN-Habitat and BASF, was ceremonially opened on Thursday 6th January by Chief Minister, Southern Province Hon. Shan Wijeyalal de Silva, on the invitation of the Mayor of Galle His Worship Methsiri de Silva. Parliamentarians, members of the Municipal Council, UN-Habitat and BASF officials, and the local fishing communities also joined the ceremonies. 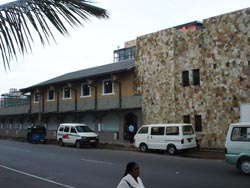 Located in the center of Galle town, the new fish market provides the fisher communities and the vendors, a modern facility for trading their produce. The new facility incorporates proper hygienic standards and food security features.

The old colonial style market built by the British in 1890’s was destroyed in the 2004 Indian Ocean tsunami. There were fourteen fish stalls, trading in the traditional style.

Mayor of Galle Mr. Methsiri de Silva speaking at the event said “Galle Fish Market is a historic site and it has been reconstructed maintaining the architectural designs of the city. It was a long felt need” and he assured that municipality will maintain proper sanitary standards in the market.

The project was funded by BASF, the leading chemical company, through a public-private partnership. Commenting on their contribution Mr. Amal Perera, Managing Director, BASF Lanka (Pvt) Ltd said, “Sustainable development at BASF is a long-term commitment. Each of our community development projects therefore is carefully chosen, linking the core philosophy of BASF to issues important to the local country. The new fish market will enhance the livelihoods of the local fishing community in Galle”. 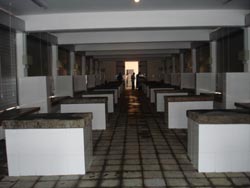 The new building houses space for a sea food restaurant, located on the first floor overlooking the Indian Ocean. This facility is expected to attract tourists expanding the market opportunities for vendors, and consequently creating more employment opportunities.

Speaking at the event Mr Laxman Perera UN-Habitat Program Manager for Sri Lanka stated “UN-Habitat has been assisting Galle for a considerable period of time in housing, governance and environmental affairs. UN-Habitat firmly believes in a participatory process which helps the beneficiaries express and fulfill their needs and expectations whilst ensuring a sense of ownership”. He was glad that the local fisher folks, vendors, the Municipal Council and other partners have adopted such as approach in this project.

Hon Manusha Nanayakkara M.P for Galle District stated that new Fish Market will give a new life to fish traders, and that plans are underway to develop the Galle city as an attractive tourist destination. The Southern Province Fisheries Minister and Deputy Mayor, Galle also addressed the gathering.