The partnership recognizes need for a pro-active strategy developed using a consultative process, a critical catalyst in ensuring continued sustainable development of Sri Lanka. According to the Ministry of Environment the absence of a national policy has become a major obstacle in the country in responding to concerns and repercussions of climate change.

With this new initiative a framework has already been developed incorporating the contributions of the Government of Sri Lanka, Partner organizations and citizens of Sri Lanka. A team of consultants form the University of Peradeniya will now devise the new national policy based on this framework.

In Sri Lanka, according to the department of meteorology, the annual rain fall has decreased by more than 7% in the past 3-4 decades; Annual mean air temperature anomalies have shown significant increasing trends. Weather patterns have increasingly become less predictable, causing floods in certain areas and droughts in others. In January and February 2011 floods displaced over 1.2 million people from their homes in 14 of the districts in Sri Lanka. The long term damage caused to housing, agriculture, industries and infrastructure is yet to be fully enumerated in financial terms. 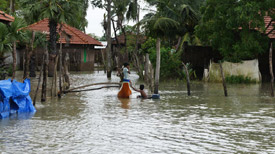 Within this context, the Ministry of Environment recognizes the need to address through the new policy, the strategies for climate change mitigation, technology transfer, financing and investment mechanism, education, training and awareness, monitoring, assessment and management of impact risks due to climate change.

In 2010, the Climate Change in Cities Initiative (CCCI) of UN-Habitat helped the cities of Batticaloa and Negambo develop Climate Change City Profiles, strategies and action plans. This initiative emphasizes the need for a dialogue between, and a congruent approach at national and local levels, especially with an emphasis on vulnerability of the poor in climate change scenarios. The Green House Gas Assessments conducted were unique in their detail given the size of the two cities, and helped shape the global standard for an Urban Green House Gas Index.

Increased utilization of fossil fuels and deforestation has caused the “greenhouse gases” to increase significantly, in turn increasing the temperature in the earth’s atmosphere. The more obvious impacts are the melting icecaps in polar areas, the continuously rising sea-levels and increased unpredictability of weather patterns leading to natural catastrophes.

Perhaps the biggest “environmental problem” facing the humanity, Climate Change has been underlined as the “the defining challenge of our age” by the UN Secretary-General, Ban Ki-moon.